Biotechnology skeptics may split on how to regulate New Breeding Technologies

Are you ready for GMO labeling 2.0? The term “genetically modified organism” has never made sense as a designation for food using ingredients grown from seeds engineered using transgenic procedures; genetic engineering is a process not an end point. Now that confusion could be compounded if opponents of biotechnology succeed in efforts to have products made through various genet editing (GE) techniques categorized legally as genetically modified (GM).

Gene editing using the CRISPR-Cas9 system is one example of a high tech tool for applications from food production to insect-borne disease control whose future will depend on GE terminology usage develops.

In common usage, and in terms of regulations, “genetically modified (GM)” is equated with transgenic—altering the genome of a plant with a gene donated from a different species, with the donated species being plant, animal, fungal or microbial. This why the term “foreign DNA” is often used when talking about transgenics, although that word is technically incorrect, as many genes are shared among all living species.

But a plant also can be engineered to express its own genes differently than how they are commonly expressed. One example of this is RNA interference (RNAi); this is the technique used to create the Innate Simplot potato so it does not easily bruise, produce acrylamide on heating, or involve the insertion of additional genes into its genome. 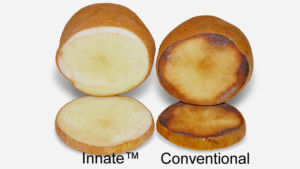 But anti-GM critiques refer to it as a “GMO” and a candidate for proposed GMO labels. They are lobbying the European Commission (EC) with the goal of bringing about a European ruling to classify new breeding technologies (NBT) and CRISPR edited sterile insects as GMOs, which would effectively ban them. Here is Greenpeace’s rationale:

The European Commission is considering whether genetically modified organisms GMOs) [sic] that have been produced through a range of new techniques should be excluded from the European Union’s GMO regulations. Biotechnology companies want to apply these techniques to engineer plants and animals for use in industrial food, biomass and biofuel production. They argue that these new methods to directly modify the genetic make-up of living organisms fall outside the scope of EU GMO regulations. This would mean that there is no risk assessment, labeling and monitoring of GM organisms produced by the new techniques and their derived products. The Commission has announced that it will present a legal analysis on the matter by the end of March 2016.

But with fierce lobbying on both sides of the issue, EC has stalled on announcing its ruling.

Concerns of NGOs are based on a valid point that powerful technologies, such as CRISPR genome editing, could present grave dangers if they are used irresponsibly or before adequate research is done to ensure that the repercussions can be reasonably understand. There is great caution about human germ line for this very reason. We’re not there yet, but we may be soon.

Another potential application of genome editing that has been cited as a potential example of biotechnology misuse is the use of gene drives to thwart insect-borne disease. A CRISPR-powered gene drive can be forced into a population by introducing a genetic sequence that drives the gene with its altered traits through successive. With populations of mosquitos that carry malaria, dengue, and Zika, a relatively small population of genetically altered sterile mosquitos can be introduced that not only provide immunity against an infectious agent–the Plasmodium parasite that causes malaria, for instance–but if received by offspring on a chromosome from one parent, copies itself to the adjacent, homologous chromosome. While it sounds as though it could only be used for good, there is concern that such a system could disrupt a biosystem. To address this, gene drive researchers are developing eraser programs, also delivered using CRISPR-Cas9, that could essentially turn off or even reverse the first drive that was introduced.

These new technologies may split what has come to be known as the “anti-biotech” movement: one faction is likely to continue to oppose new biotechnology applications, using the GMO stigma and using for precautionary laws to restrict research and utilization. They will be driven by ideology even at the expense of improved sustainability. Other, more science focused critics, might begin to view next generation genetically engineered products through a lens that is significantly more nuance.

Recently, some proponents of organic farming have been making distinctions between precision breeding techniques, such as RNAi and CRISPR-Cas9 applications and techniques that involve “foreign DNA”, because they see sustainability value in high tech procedures. that might ultimately be adopted as organic certified.