Whether personally or professionally, Daniel Kronauer of Rockefeller University is the sort of biologist who leaves no stone unturned. Passionate about ants and other insects since kindergarten, Dr. Kronauer says he still loves flipping over rocks “just to see what’s crawling around underneath.”

In an amply windowed fourth-floor laboratory on the east side of Manhattan, he and his colleagues are assaying the biology, brain, genetics and behavior of a single species of ant in ambitious, uncompromising detail. The researchers have painstakingly hand-decorated thousands of clonal raider ants, Cerapachys biroi, with bright dots of pink, blue, red and lime-green paint, a color-coded system that allows computers to track the ants’ movements 24 hours a day — and makes them look like walking jelly beans.

The scientists have manipulated the DNA of these ants, creating what Dr. Kronauer says are the world’s first transgenic ants. Among the surprising results is a line of Greta Garbo types that defy the standard ant preference for hypersociality and instead just want to be left alone.

The researchers also have identified the molecular and neural cues that spur ants to act like nurses and feed the young, or to act like queens and breed more young, or to serve as brutal police officers, capturing upstart nestmates, spread-eagling them on the ground and reducing them to so many chitinous splinters.

Dr. Kronauer, who was born and raised in Germany and just turned 40, is tall, sandy-haired, blue-eyed and married to a dentist. He is amiable and direct, and his lab’s ambitions are both lofty and pragmatic.

“Our ultimate goal is to have a fundamental understanding of how a complex biological system works,” Dr. Kronauer said. “I use ants as a model to do this.” As he sees it, ants in a colony are like cells in a multicellular organism, or like neurons in the brain: their fates joined, their labor synchronized, the whole an emergent force to be reckoned with.

“But you can manipulate an ant colony in ways you can’t easily do with a brain,” Dr. Kronauer said. “It’s very modular, and you can take it apart and put it back together again.”

Dr. Kronauer and his co-authors describe their work in a series of recent reports that appear in Proceedings of the National Academy of Sciences, The Journal of Experimental Biology and elsewhere. 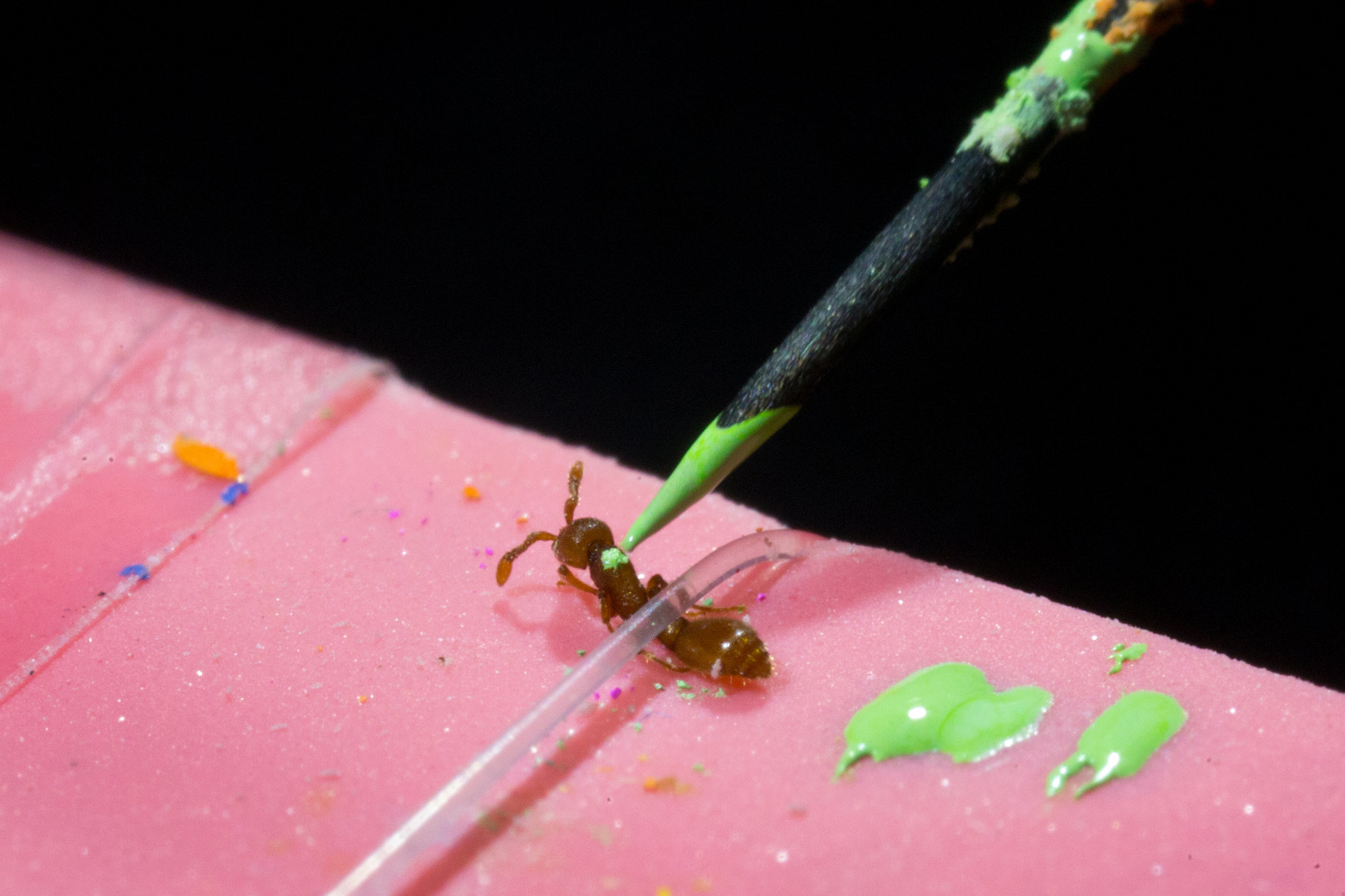 A color-coded system allows computers to track the ants’ movements 24 hours a day.

The researchers hope to turn the clonal raider ant into a so-called model organism, right up there with such laboratory stalwarts as E. coli and Drosophila. But while bacteria and fruit flies have proved invaluable for addressing fundamental questions of how genes operate or body plans arise during development, Dr. Kronauer’s model ants offer scientists the chance to explore, under controlled conditions, the origin and evolution of animal societies.

“His system is unbelievably promising for anyone who wants to study social behavior,” said Corina Tarnita, an associate professor of ecology and evolutionary biology at Princeton University who has worked with termites and microbial communities.

“You can ask, what are the basic ingredients, the elementary operations that nature has used repeatedly to produce societies — whether you’re talking about ants, slime molds, baboons or even the very first human societies.”

Gene Robinson, a honeybee expert and director of genomic biology at the University of Illinois at Urbana-Champaign, said, “Social insect colonies are the quintessential complex system, and Daniel has developed a very powerful set of tools addressing big questions of how they operate, and how, in the absence of central control, local interactions can give rise to global patterns.”

One key to the raider ant’s potential as a laboratory workhorse is its adaptability. Many ants are finicky. Not so Cerapachys.

“It’s a weedy species,” Dr. Kronauer said. “That’s true of a lot of model organisms — they have a global distribution, they’re good at invading disturbed habitats, and they’re good at being raised in a lab.”

To trace the knotted skeins of antly social life, the researchers take a battery of approaches. They knock out ant genes or edit the lettering of ant genes and see how the ants respond. They ply ants with radioactively labeled neurochemicals and check where in the ants’ brains the signaling molecules gain purchase.

They measure ant movements by fractions of a millimeter as the insects perambulate along finely calibrated grids traced in ceramic. They overfeed the ants and starve the ants; they mix and match ants of varying age, life experience and transgenicity.